Advertisement
Home Automotive News First Car In The World: From Steam to Fuel 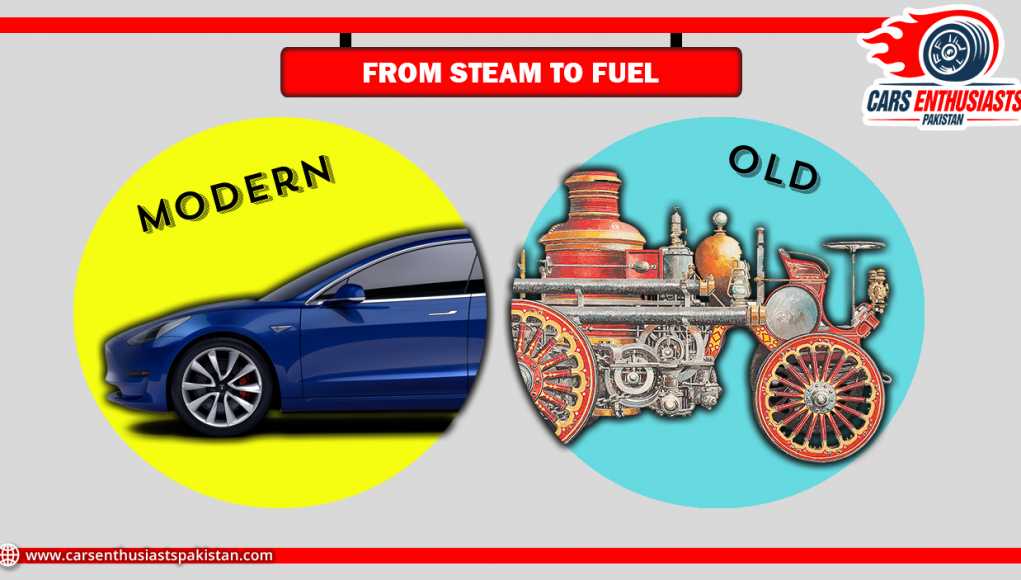 First Car In The World may been from the idea by Ferdinand Verbiest who had gifted a working model to the Emperor during his Jesuit mission in China around 1672. His steam- powered model was the source of inspiration for Nicolas-Joseph Cugnot, but neither model was to become how cars are made today. The problem with steam powered car is that they run out of water and was hard to control the output. Hence it was unreliable as a mode of transport.

In 1807, the world’s first internal combustion engine was both created by Nicéphore and Claude Niépce, and François Isaac de Rivaz. The Niépce brothers used their controlled dust explosion engine to power a boat upstream, while de Rivaz engine was put in a vehicle and used hydrogen gas as fuel. While both designs were unsuccessful, many inventors had improved on their designs. Since then, inventors had worked on different power sources, from dust, gas to gasoline. 63 years later, Siegfried Marcus designed and built a gasoline combustion engine, using the four- stroke engine that was invented by Nikolaus Otto in 1861.

Modern Car That Shaped The Transport

It is widely accepted that Karl Benz is the inventor of the first car in the world that works reliably and can be bought affordably. His first Motorwagen was built in Mannheim, Germany during 1885, although he was granted patent for during 1879. Karl’s company Benz Cie was founded in 1883. The company sold his Motorwagen through his company in Germany and Emile Roger in France. His wife Bertha Benz was the first female to drive the first car in world, for 180 KM, in 1888 to prove it’s worth. Karl Benz’s success in creating the world’s first production car. To improve on his designs. Karl Benz continued to innovate, and he managed to patented his boxer-motor, first internal-combustion flat engine. Karl was also the first inventor of the battery powered ignition that we are still using today.

Mass Production: Cars for Everyone

While Karl Benz created the first Motorwagen. It was Henry Ford’s Model T that was the first car in the world that was truly affordable to all. To make car production more efficient, Henry Ford built machines to stamp out parts automatically, and broke down the car building process. He was inspired by the continuous- flow production of the food industry. He created the moving- chassis assembly line in December 1913. With a more efficient build process, the Ford’s Model T was the first car in the world that was available to middle class residents, and it ushered America’s age of modernization through mass production.

The accepted definition of sport cars is a car that is built for speed, handling and performance. Sports car usually come only with two seats to reduce weight and increase speed, but there are models that can carry four passengers. Although there are many prototypes built during 1900s, the universally accepted first car in the world in this division was the Vauxhall 25 hp Prince Henry, built in 1914. It was manufactured by Vauxhall, and the car was named after Prince Henry of Prussia. It was made from a 4-cylinder mono-bloc design, and also had won speed trials as well as fuel economy awards.

Quoting Henry Ford “Auto racing began 5 minutes after the second car was built.” hinted that car racing had become a sport once they were available. Sports cars usually features a lower body for better stability in high speeds, as well as better transmission and handling. In 1966, the Jensen FF became the first car in the world in the sports division to have an all-wheel drive system for better torque and traction during races.

Electric was considered as a power source for automobiles since 1837, when the first electric car was built using galvanic cell batteries. It was no surprise that the battery did not last long enough to have a use. Even with the invention of rechargeable batteries in 1859. The electric car was built in 1888 in Germany by Andreas Flocken. As electric batteries do not smell and easier to start that gasoline cars, France and the United Kingdom favoured use of electric cars as they were not as noisy. In London during 1897, there was a fleet of electric taxis called the Hummingbirds, owned by Walter Bersey. In America, the Samuel’s Electric Carriage and Wagon company operated the twelve electric cabs until 1898.

As gasoline powered cars became the preferred vehicle to due cheaper gasoline and better roads, electric cars became sidelined. It was difficult to find places to charge the cars between drives, Despite better technologies, because electric car’s popularity waned as it became more expensive to run than modern cars. In 2004, Tesla Motors developed the first car in the world that was electric- run using lithium-ion battery cells. The all- electric car could travel around 320 km or 200 miles per charge. With interest growing for fuel efficient and environmentally friendly cars, electric models are making a comeback.

Steam motors were by all accounts not the only motors utilised in early autos as vehicles with electrical motors likewise picked up footing around a similar time. At some point somewhere in the range of 1832 and 1839, Robert Anderson of Scotland created the main electric transport. They depended on battery-powered batteries that fuelled a little electric engine. The vehicles were overwhelming, slow, and costly and should have been revived every now and again. Power was increasingly useful and effective when used to control tramways and streetcars, where a steady supply of power was needed. However, around 1900, all sorts of other vehicles were surpassing in America. At that point in the quite a long while in the 1900 offers of electric vehicles accepting a thrust as another sort of vehicle fuelled by gas came to overwhelm the shopper advertise.

Why No Steam Engines Anymore?

What will the car in the future look like? “It will fly and they will be controlled by electric engines.” These will be the most likely answer you will hear. Therefor steam engines? I don’t think so.

During a time of touchscreen systems, autos which can remotely guide themselves without the requirement for a driver and electric batteries that can keep going for 300 miles or more, there’s not really any space for an out of date innovation like the steam motor. Isn’t that so?

By the excellence of their structure steam motors give most extreme torque and quickening in a split second like electric engines, and especially for urban driving where there’s loads of ignition turn on and halting, clean-consuming steam power would be beneficial. Thinking back to the 1920s, steam autos required immense and massive steam whistle to withstand the energy and gas pressure expected to control the vehicle, implying that even the littlest steam vehicles liberate a couple of tons at any rate. With cutting edge condensers and present-day streak boilers, it could be conceivable to manufacture a productive, light and reasonable steam vehicle with a warm-up time of seconds as opposed to minutes. It makes one wonder: with current worries about eco-friendliness and clean vitality, for what reason does no one make a steam-controlled vehicle nowadays?

Many refer to misinterpretations that steam requires huge boilers and motors to run or that steam vehicles are bombs simply already in the works because of the high constrain expected to cause them to work. Most of these, in any case, are either level out false or have been invalid by progressions in present-day innovation and gadgets.

Given the rising famous of electric and hybrid cars, it’s currently not simply conventional ignition motors that steam power needs to race with. However, while hybrid/electric vehicles are a positive development, they will remain intensely dependent on petroleum products until clean vitality turns out to be accessible.

Hybrids specifically utilize a mixture of a little oil-burning motor and an electric engine. They utilize less fuel than a standard burning controlled vehicle; however despite everything they need it. In spite of the fact that they produce less discharge also, there still stays a few and electric autos, as we’ve just called attention to.

Outflows are substantially less of a worry for steam motors, however in no way, shape or form completely gone. All things considered, as indicated by the organization’s site, their steam motor consumes longer than most others and in this manner burns increasingly unsafe particles, which results in fewer fumes emanations.

In spite of the fact that those fumes are reliable on the kind of fuel utilized, reasonably sourced powers could have a lot littler effect on the earth instead of existing petroleum products which quite often consume unhealthily.

The Future Of Steam Power

At last, maybe the most compelling motivation why steam power is never again utilized via vehicle producers can be in short because of Big Oil. For whatever length of time that the ignition engine vehicle has existed, the worldwide oil industry has delighted on the car business, realizing that its reality is important to enabling drivers to move. The take-up in low contamination vehicles and an expanded spotlight on natural agreeableness could at long last be debilitating the connection between the oil business and driving. Rather than biofuels like ethanol shoe horning, the inner burning motor into another universe of discharges limits, new and imaginative arrangements are coming thick and quick, fuelled by innovation and time of rivalry.

Market obstruction is as yet an issue, yet with the increasing number of electric, hybrid and other than again fuelled vehicles hitting the market, maybe sooner rather than later steam-controlled autos will never again appear such a specialty. In the event that makers can make sense of an approach to create steam motors on an enormous scale for not exactly an inner burning motor, at that point without a doubt automaker would rapidly cotton on.

It may have gone before the interior ignition motor by around 200 years, however as the world is at last beginning to investigate the future practicality of individual vehicle, maybe the blowing, coasting elegance of steam power will get another opportunity to buy and by come out ahead of the pack.

Since the 1920s, people had wanted a car that could drive itself, evident in the automated driving system that was developed first by Houdina Radio Control. While the driver less car was controlled by radio frequency, trials lead to using electrical impulses to control the car remotely. The GM Firebird II was the first car in the world that was designed and built with a sensor at the bottom of the car. It was designed to be controlled by a custom built electronic highway. The both the sensor and the highway never came into fruition.

Ernst Dickmanns was the man who put the first car in the world that could drive itself in France. As part of his Prometheus project in 1994, Ernst fitted two Mercedes-Benz SELs with cameras and sensors. The cars could change lanes, driving up to 130 kilometres per hour, as well as reacting to other cars, While Ernst Dickmanns was successful. The technology in 1994 was not equipped to have a fully automated self- driving car.

Stay tuned to Cars Enthusiasts Pakistan for the latest blogs of automotive industry.